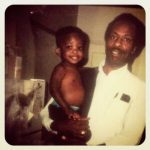 This series highlights the unique and personal narratives of three black men and their relationships with fatherhood—both as a father and son. Terrence “Tyrie” Ivory, Malcolm Jackson, and Marcus are all committed affiliated of the Mindful Life Project (MLP). Located in Richmond, MLP empowers underserved children through mindfulness and other transformative skills to gain self-awareness, confidence, self-regulation and resilience, which leads to lifelong success. The stories of Tyrie, Malcolm, and Marcus truly provide context towards their passion in working with children and building mindfulness.

The Story of Malcolm Jackson

Malcolm Jackson was born and raised in the Bay Area of California, yet Louisiana is the fertile ground of his father and grandfather’s upbringing. This environment was known for being country, southern, and conservative. Malcolm discloses that his grandfather raised his father through the “old school” mentality, which was passed down into the practices of Malcolm’s father.  His dad also always pushed him in a way that Malcolm didn’t understand when he was younger, yet he developed to see the positive impact as an adult. Malcolm described his father having a “first-place” mentality, meaning that he wanted Malcolm to truly be the best at everything he does. He mentioned that it was okay to have 4th place, but he always pushed Malcolm to get to a “first-place”. He recognizes that he didn’t have the “lovey dovey” persona that he sees in black fatherhood today and felt like he had a lot to prove to his father. Nonetheless, he grew to understand that his father does love him.

Malcolm saw the honor and integrity in being mindful on how to represent their name in public presentation, especially as a man. Therefore, he saw the unique value in having a black father as well as becoming a black father. He recognizes that being a black father has its own experiences that others may not have or understand, which truly makes the journey special. Conclusively, Malcolm has been very mindful and strategic about not having kids yet. He is currently in a season of equipping himself so that when the time comes, it will be right. In the meantime, he pours such positive attributes and care into the youth that he cares for through the Mindful Life Project.

What was one moment where you realized that being a black father was really difficult?
Even though Malcolm does not yet have kids, he sees that there is a difficulty in the differences between the experiences of kids within the same neighborhood, community, or environment. Even though there is a lot of support and motivation through seeing kids at different levels of ability, it can sometimes be challenging for each child to feel confident or valuable based on what their counterparts have. Through MLP, he hopes to mindfully support and encourage each participant to feel valuable despite their experiences–which he has been quite successful in.

“Thank you for teaching me about the struggle.”