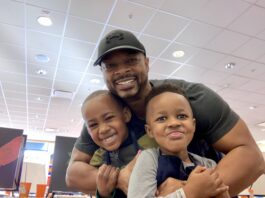 This series highlights the unique and personal narratives of three black men and their relationships with fatherhood—both as a father and son. Terrence “Tyrie” Ivory, Malcom Jackson, and Marcus are all committed affiliated of the Mindful Life Project (MLP). Located in Oakland, MLP empowers underserved children through mindfulness and other transformative skills to gain self-awareness, confidence, self-regulation and resilience, which leads to lifelong success. The stories of Tyrie, Malcolm, and Marcus truly provide context towards their passion in working with children and building mindfulness.

The Story of Tyrie Ivory

Tyrie was born on a marine base with his mother and father. His father was 23 years old and a marine. Upon Tyrie turning ten, his parents separated, and his mom moved him to the west coast. He learned that his mother left because his father was a batterer. Although Tyrie’s heart hardened because of his father’s absence, he learned over the years that this was a behavior that was passed down through the generations. Tyrie learned that his father, grandfather, and great-grandfather had witnessed battering as well, which became an adaptive behavior. Tyrie finally saw his dad years later, but the visit was in response of his father having cancer and hoping to right his wrongs with Tyrie. This journey has shaped a space to empathize and give context to the behaviors that have been placed upon his father, generationally. Tyrie knew that he needed to bring a halt to this vicious cycle and thus do things differently as a father. Therefore, he ensures that he shows up to everything for his sons so that they know that he is committed to everything that they need. He consistently is reminded of the mantra from his mother, “remember how it felt when your dad wasn’t around?”

Tyrie’s sons, Breslan (8) and Brycen (6), have the privilege to experience firsthand the transformation of a generational practice into a mindfulness of demonstrating love and commitment from their father. Tyrie recalls that upon the birth of Breslan, he was very nervous about fatherhood but remembered that fatherhood was always in his blood. As they both share middle names, this brings together the idea of brotherhood and being connected in very unique ways. Tyrie explores the importance of instilling racial identity and brotherhood in his sons so that they understand how the world views them, and how to navigate their personal self-identity. Tyrie enjoys raising his sons with his wife, Ronda Ivory.

Tyrie recognized that he had to develop a “double consciousness”—how to be black, and then how to be black in America. He found that there was this constant balance in teaching his sons on how to strive for excellence and achieve the things they aspire, but also not crushing their spirits based on the America narrative of Black Men.

Being a black father, and even a black man is its own culture. It’s like a barbershop mentality—you don’t have to explain certain vernacular, but there is this mutual respect and understanding. There is an appreciation in the food, art, music, and everything that bring black fathers together.

“I forgive you, and still love you.”